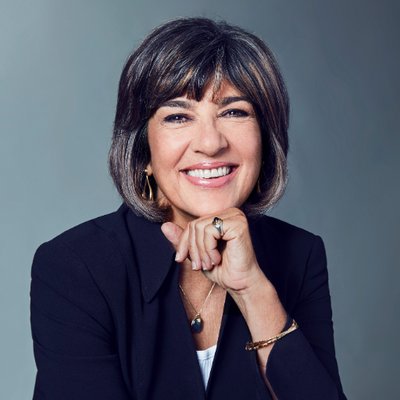 Christiane Amanpour born Christiane Maria Heideh Amanpour is a British-Iranian journalist and television host from Ealing, Middlesex, England best known as the Chief International Anchor for CNN and host of CNN International’s nightly interview program Amanpour. She has been working there since 1983. Previously, Christiane worked for NBC affiliate WJAR in Providence as an electronic graphics designer.

Here is all you need to know about Christiane Amanpour Bio-Wiki, Age, Birthdays, Net Worth, Nationality, Wikipedia, Family, Parents, Siblings, Instagram, and Twitter.

She is 64 years old as of 2022. Christiane was born in Ealing, Middlesex, England, the UK on 1958 January 12th. Thus, her next birthday will be on the 12th of January and her zodiac sign is Capricorns.

She is currently single. Christiane was previously married to her better half, James Rubin, though they divorced in July 2018. They have been together from 1998 to 2018. Her ex-husband is an informal adviser to former US Secretary of State Hillary Clinton to former President Barack Obama. Moreover, the duo shares a son, Darius John Rubin, who was born in 2000.

Amanpour has spent most of her youth and childhood in the West London suburb of Ealing. She is the daughter of Mohammad Taghi (dad) and Patricia Anne Amanpour. (mom). Christiane’s father was Iranian, from Tehran. She was brought up in Tehran until the age of 11.  Her mother was Catholic and her father was Shi’ite Muslim.

Amanpour has an estimated height of 5 feet 6 inches and weighs around 76 kg.

Amanpour works as the Chief International Anchor for CNN and host of CNN International’s nightly interview program Amanpour. She also works as a correspondent for CNN and was one of the leading war reporters of the late 20th and early 21st centuries. Christiane also hosted the PBS interview series Amanpour & Company and the ABC news program This Week.

Amanpour subsequently shifted to the United States to attend the University of Rhode Island. During her time there, she operated in the news department at WBRU-FM in Providence, Rhode Island. She also served for NBC affiliate WJAR in Providence as an electronic graphics designer.

Upon graduating, Christiane was employed in September of 1983 at the fledgling CNN as an assistant for the international news desk. By 1986 she was serving at CNN’s New York City bureau as a producer-correspondent. Amanpour gained her big break in 1989 when she was promoted to a post in Frankfurt, West Germany. She arrived there at an opportune time, and Amanpour quickly became CNN’s on-the-spot reporter.

Amanpour also received a distinction in Europe, but it was during the Persian Gulf War (1990–91) that she became a familiar face. She also reported the conflict from the Iraqi invasion of Kuwait to the eventual triumph of the U.S.-led coalition. After the war, she covered the Kurdish uprising in northern Iraq. While continuing to cover the field as CNN’s chief international correspondent, Amanpour occasionally contributed (1996–2005) to the CBS newsmagazine program 60 Minutes. For CNN she presented a series of programs that delved deeper into an issue than was possible on a nightly news show.

Her presentation included Where Have All the Parents Gone? (2006), which focused on Kenyan kids who had been orphaned because of AIDS; In the Footsteps of bin Laden (2006); and The War Within (2007), a report on Islamic unrest in the United Kingdom. She also produced the six-hour series God’s Warriors (2007), which dealt with the defenders of Christianity, Judaism, and Islam. Amanpour hosted the CNN interview series, Amanpour, from 2009 to 2010.

Amanpour left CNN in 2010 to join the news division at ABC, and she became the host of ABC’s political affairs show This Week later that year. She stepped down from the program, nevertheless, in December 2011. In a special arrangement, she then carried on her role at CNN while reporting at ABC as its global affairs anchor. Amanpour went back in 2012 on the CNN International channel, and in 2017 it also commence airing on the Public Broadcasting Service as Amanpour on PBS. It was an interim replacement for the Charlie Rose show—which had been abruptly called off amid allegations of sexual misconduct by Rose—and in 2018 the time slot was given to the newly created Amanpour & Company. The hour-long interview featured Amanpour as well as various correspondents; it also premiered on CNN International.

Amanpour was the beneficiary of numerous honors, including an Edward R. Murrow Award (2002). In addition, in 2007 she was titled a Commander of the Order of the British Empire (CBE).

Amanpour’s net worth is estimated at around 1 million and above. However, his professionalism as the Chief International Anchor is the main source of revenue.