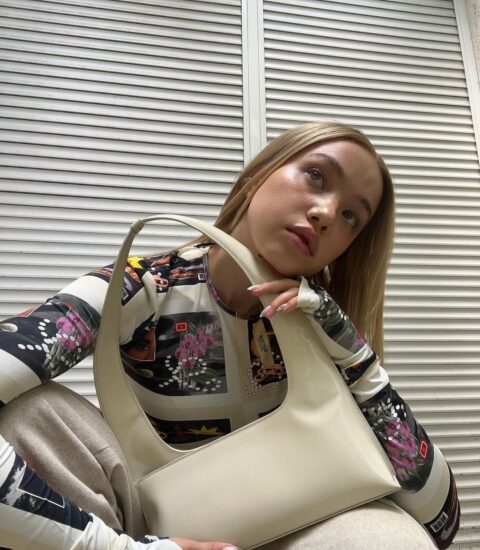 Emilija Baranac also known as Ems is a Canadian actress and model who is well known for her breakout role as Midge Klump on the crime and drama television series, Riverdale. Emilija Most Recently portray the role of Zoe Christensen in the Netflix TV series Fakes.

Actress Emilija is 28 years old as of 2022. Born on August 4th, 1994, in Vancouver, British Columbia, Canada, Baranac celebrates her birthday every 4th of August. Emilija’s zodiac sign is Leo.

Emilija Baranac Boyfriend, Is She Dating?

Emilija has been dating, Issey Lamb, since 2018. Issey Lamb also known as Issey Taylor is a music producer. Both of them have continuously shared their photos via their Instagram account. Baranac and Issey have no children.

Previously, Emilija was in a relationship with an Instagram Star in which she shared their photos via Instagram. Later on, Emilija deleted a photo after her breakup.

Baranac is a graduate, although she lays a low profile on her educational background.

Emilija’s mother is known as Mira Baranac. The Riverdale’s cast, Baranac has shared a photo via her Instagram account of her mother. Baranac’s mother is a math teacher in high school. Although the Riverdale cast Emilija lays a low profile about her father, he owns a company. We can also not confirm if she has any Brothers, sisters or Siblings.

Emilija stands at a height of 5 feet 5inches. Baranac weighs 52kgs. Her overall measurements are 25-34 inches; waist and hips respectively.

Baranac’s debut role was in 2013 when she played Sophie in the film, Aliens in the House. Two years later, Emilija appeared as Crystal Thomson in one of the episodes of the series, Supernatural 2015. In addition to that, Emilija played Paige Winters in the film, Love You To Death.

In between 2017 to 2019, Baranac made her breakthrough appearance in the Crime, Drama, and Horror series, Riverdale as Midge Klump. Baranac played the main cast as Genevieve in the film, To All the Boys I’ve Loved Before. In 2021, Emilija played the secondary cast, Hailey Holcomb in the film, There’s Someone Inside Your House. Also, she has played Heidi in the series, Charmed from 2019-2021.

Baranac plays a major role Zoe Christensen in the television show, Fakes. Emilija plays alongside Jenifer Tong and Richard Harmon. Fakes is a television series in which two teenage friends played by Emilija ‘Zoe’ and Jenifer ‘Becca’ build a fake ID empire. However, the empire grows which makes their crime life be more real.

Baranac’s parents are Serbians thus she learnt Serbian as her first language. At 11 years, Emilija could not speak English thus her parents sent her to acting classes. Baranac has shared reels while speaking Serbian. Emilija’s ethnicity is Serbian.

Emilija has an Estimated net worth of $1 Million or More. Her successful acting career is her Primary Source of Income.