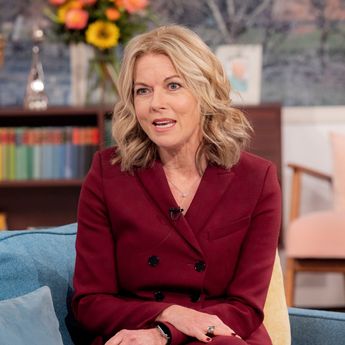 Mary Nightingale is an English television presenter and journalist from Scarborough, North Riding of Yorkshire, England best known for presenting the ITV Evening News. She has been part of the ITV News family since 2001. Previously, Mary worked for BBC World’s World Business Report as a writer and presenter, covering corporate news and economic.

Here is all you need to know about Mary Nightingale Bio-Wiki, Age, Birthdays, Net Worth, Nationality, Wikipedia, Family, Parents, Siblings, Instagram, and Twitter.

Nightingale is happily married to her better half, Paul Fenwick, a television producer, and the former Human Resource director of Trailfinders. The couple has been together since 2000. Mary and her husband, Paul are the proud parents of two children though their details are not out yet.

Nightingale is a very learned woman. She studied at St Margaret’s School, an independent school for girls, near the Royal Devon and King Edward VI School in Totnes, Devon, and Exeter Hospital in Exeter, Devon. Then, Mary went and attained a BA in English from Bedford College, University of London, now merged with Royal Holloway, University of London

Nightingale spent most of her childhood and youth in Scarborough, North Riding of Yorkshire, England. She has not mentioned any details concerning either her parents or if she has siblings. However, this section will be updated once the actual details are out.

Nightingale has an estimated height of 5 feet 6 inches and weighs around 70 kg.

Mrs.Paul is English by birth and she holds white Ethnicity.

Nightingale is a presenter of the ITV Evening News (6:30). She began her television career at TV Tokyo, serving on World Business Satellite. She then proceeded to work for BBC World Service Television’s World Business Report as a presenter and writer, reporting economic and corporate news. In 1994, Mary also worked as a presenter for Reuters Financial Television on the early morning financial program. She operated for ITN in 1995, presenting weekend editions of their World News service.

She has also reported sporting events for the major UK television networks, such as the BBC Two’s Ski Sunday – for which she reported the 1996 World Skiing Championships in the Sierra Nevada. The following year, she co-presented the daily evening highlights program on the Rugby World Cup in South Africa for ITV.

Away from the newsroom, Mrs. Paul presented ITV’s flagship holiday program Wish You Were Here…? from 1999 to 2001 and also reported The Really Good Food Show, I-Spy, and Most Wanted.

Mary was awarded a prize for being Newscaster of the Year in the 2002 Television and Radio Industries Club (Tric) awards.

Nightingale’s net worth is valued at around 1 million and above. However, her professionalism as a journalist is the main source of income.