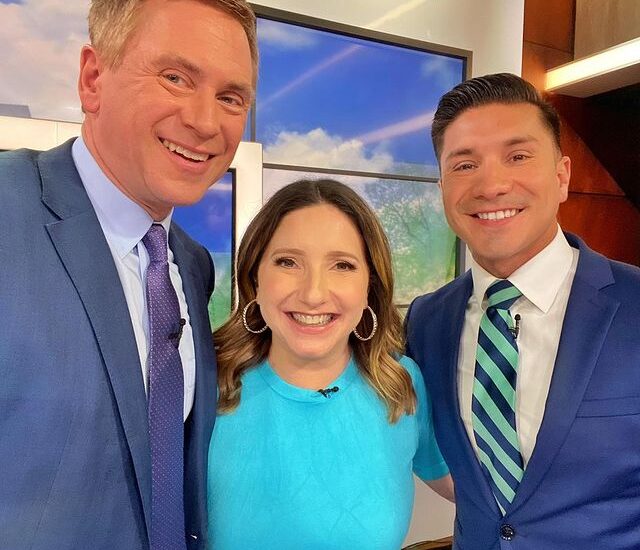 Jamie Shupak Stelter is an American Multimedia Journalist who Currently Co-Anchors NY1’s ‘Morning on 1 alongside real-life friends Annika Pergament and Pat Kiernan. She is Perhaps well known as the Wife of American TV anchor Brian Stelter. The Couple has been married for over 8 years now.

Jamie Shupak is 40 years old as of 2022. Born on December 31, 1982, in the United States of America she celebrates her birthday on December 31 of each year. Her Zodiac Sign is Capricorn.

Jamie Stelter is well known as the Wife of Popular American News Anchor Brian Stelter. Brian and Jamie met through Pat Kiernan who was a Mutual Friend. The pair tied the knot in a Jewish Wedding Ceremony in 2014. They have been married ever since.

For her educational background, Jamie attended Damascus High School and graduated from the Institution with Good Grades.  In 1999 she joined the University of Maryland and Graduated with a Bachelor of Arts degree in 2003.

Jamie was born and Raised by Her Loving parents in the United States of America. Her Parents Neil L. Shupak (Father) and Helen R. Shupak (Mother) were both very dedicated Parents who worked hard to ensure that they Educated her and put food on the Table.

Growing up in the United States As a young girl she enjoyed helping her Mother make the Families Dinner and may have learnt a Recipe or Two. She had a Normal Childhood though Little is known about her Father and Siblings

Her Father, Neil L. Shupak was a Very Hardworking and Dedicated Man who ensured he Put food on the Table for his Family and Daughter.

She stands at an estimated Height of 5 Feet 2 Inches tall. Her weight and other Common Body Measurements are Unavailable.

Jamie Stelter, an NY1 reporter, is frequently asked about her shoes and why she goes on air without wearing high heels. In 2003, she was diagnosed with rheumatoid arthritis. She has however revealed little about her Neck Surgery.

Jamie is an Emmy-nominated journalist who has managed to hold her own in this cutthroat business. She started her career at News 12 Westchester. From 2003 to 2005, Jamie worked as their traffic reporter. She then worked as a traffic and news reporter until 2008.

Jamie worked as a shooter/reporter, as well as a producer/reporter, from 2006 to 2008. Jamie’s proclivity for multitasking led her to work as a fill-in traffic reporter for CBS 3 in Philadelphia from 2007 to 2008. Around the same time, Jamie worked as a fill-in reporter/shooter for Westwood One (May 2007-October 2008). Jamie was hired as a feature reporter and traffic anchor by WTXF-Fox 29 until August 2009.

Jamie then worked as a fill-in traffic reporter for WNBC until May 2010. Jamie has been the traffic anchor for NY1News since May 2010. Between February of 2011 and January of 2013, she worked as a dating columnist for Complex magazine.

Since January 2013, Jamie has been the host and food blogger for the TheTVDinner website. Jamie is still working as an author for Polis Books, where she has been since October 2013.

Jamie earns an estimated annual Salary of around $70,000 or More.